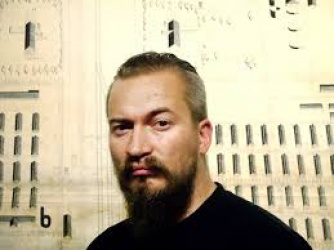 Robert Kuśmirowski graduated from the Artistic Department of the Institute of Fine Arts at Maria Curie-Skłodowska University in Lublin where he studied between1998-2003 (he graduated with a diploma in sculpture from the studio of prof. Sławomir Andrzej Mieleszko. He made his debut in the Biała Gallery in Lublin. In the academic year 2002-2003 he was granted a scholarship in the Metal and Modelling Studio at the University Rennes 2, Beaux-Arts Rennes. He is a performer, author of installations, objects, photographs and drawings. He received the Polityka Passport Award in 2005. He is associated with Foksal Gallery Foundation.
His more important works include: “The Ornaments of Anatomy”, 2006, Kunstverein Hamburg; “Unacabine”, New Museum of Contemporary Art, New York/2009, “Wagon” 45. Berlin Biennial for Contemporary Art, Berlin, 2008; “The Collector’s Massif” Bunkier Sztuki” Cracow/2009; “Bunker” Barbican Centre, London/2009; “History in Art” Museum of Contemporary Art, Cracow; “Spektrum”, Kunsthalle Wien; “The Power of Fantasy”, BOZAR, Brussels; “Polska Arts in Edinburgh 2012” Galeria Arsenał Poznań.