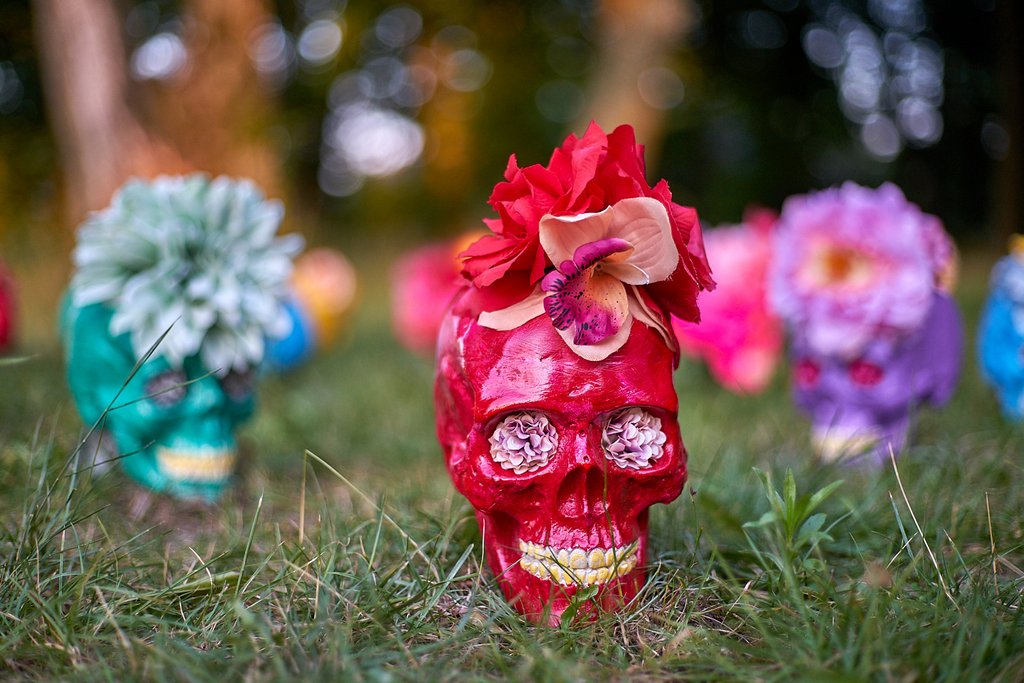 Eden is a biblical paradise created by God for the first people. In Hebrew, it means a garden of delights. Adam and Eve sealed their fate by picking fruit from the tree of knowledge of good and evil.
Afterwards they were not allowed to enter the garden again. However, it is still marked by the erstwhile human presence: traces have been indelibly left behind. Irena Nawrot’s garden is filled with
colorful flowers, but when you get closer to them, it turns out that they are pinned to color skulls. The artist tells the story of the first humans through the prism of the garden. She refers to the context of the Mexican skull, the symbol of Dia de Los Muertos (The Feast of the Dead). Three thousand years ago, when the Aztecs and the Mayans lived in America, colorful rituals dedicated to the deceased took place in the land of present-day Mexico. The guardian of those ceremonies was the goddess Mictecacihuatl, i.e. the Queen of Death, who died on her birthday. Throughout the whole month, known as the „Birth of Flowers”, the dead were worshiped. Mexican skulls are beautiful and colorfully decorated with flowers. They have also become a vital ingredient of pop culture. The garden of flower skulls plays with the symbolism of death and with the sense of kitsch. Symmetrically arranged in the form of a pyramid are, the small flowerbeds are a bittersweet memento mori.