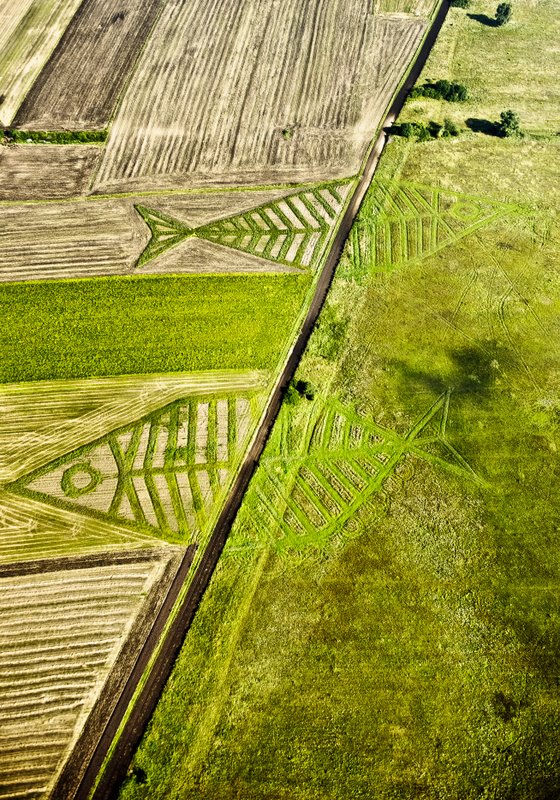 The land art work Free Flow was created on the Polish-Ukrainian border in the vicinity of two towns: Horodyszcze (in Poland) and Warez (in Ukraine). Several hundred metres of lines forming the shape of two fish were tractor-ploughed and planted with phacelia seeds on a field divided by the state border. The giant fish, with one half on the Polish land and the other half on the Ukrainian territory, symbolically and physically cross the border. This project was realized in co-operation with Barbara Luszawska, Ryszard ‘Marabut’ Pikało, Michał Strokowski and Artur Dowgird. The work was documented from bird’s eye view and presented to the public during the Land Art Festival in Kazimierz Dolny in July 2011 and a month later during the European Days of Good Neighbourliness in Kryłów in the form of a photo exhibition showing the evolution of this landscape form. The two fish, each swimming in an opposite direction, were ploughed precisely on the intersection of two green fields situated next to the Polish-Ukrainian border. The balk – traditionally perceived as a line of conflict and division separating mutual antagonisms, here runs across the picture. The fish mend a tear in the green caused by an artificial, man-made territorial division. Stretched across the border, Free Flow has symbolically effaced this frontier and connected with it border restrictions, fears, prejudices, anxieties and territorial integrity underpinned by irrational regulations.

Free flow, making of - Polish side

Free flow, making of - Ukrainian side